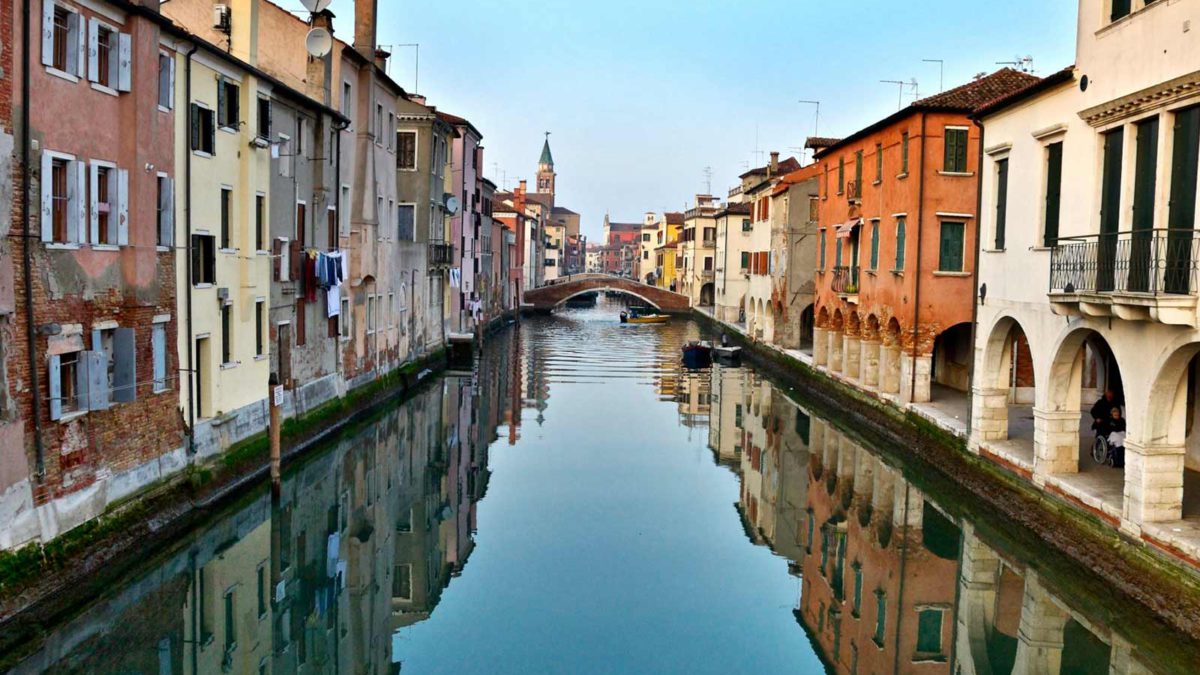 Did you know there is “another Venice” very close to the original ? Not so big, not so famous as the city of the most famous canals on the planet. There are not so many tourists, but there are also many photographic angles to portray in which you will not believe that you are in another city than Venice.

Chioggia, located 25 kilometres from Venice, is an island located south of the lagoon and it represents one of the largest fishing ports. Its proximity to the “great” city of its channels allows you to alternate both locations in your next audiovisual production depending on the needs of each moment. It is literally a city of small-scale canals, with urban characteristics very similar to that of Venice. Especially in its old town, an island of canals, connected to the mainland by a couple of streets and with a beautiful historical centre.

As for attractions, there are remarkable palaces and churches, as well as bridges and channels. In the port of Chioggia there stands even a tall column crowned with the lion, the Venetian symbol, which the inhabitants of the most famous city refer to as “the cat”, because it is much smaller than the one in Venice.

The small island of Chioggia is also known as the second Venice, thanks to its old historic centre, very similar to the centre of Venice. Like the capital, Chioggia has its own main channel, the Vena Canal, crossed by nine bridges. The Ponte Vigo, which leads to the Plaza Del Vigo, differs from the others thanks to its grandeur. You can also find many other places of interest, such as the church “Sant’Andrea”, built during the eighteenth century and the Romanesque tower built for military defense. The tower preserves the old clock tower designed by Giovanni Dondi. The museum of San Francesco, located in the homonymous church, preserves ancient archives that reveal the historical passages of the island, and it preserves in addition all kinds of objects that have to do with the history of Chioggia. Chioggia is a beautiful fishing town, with a fishing port of medium size. Its main economic source is fishing, although important economic resources are also the production of radicchio (chicory) and tourism.

Chioggia has a slower, less boisterous pace of life. There are fewer tourists and that makes it a quiet and pleasant place, which maintains the spirit of the old Venice before it became the city of luxurious palaces, erected by the Venetian trade boom, and above all, before the mass tourism started. The attractiveness of this island Chioggia must also be sought in the daily way of life that marks its fishing port. The mornings in the fish market are a spectacle, and around this world you will find many seafood restaurants, whose fame attracts the most demanding palates. Around its central street, the Corso del Popolo, which runs along the island from north to south parallel to the Vena Canal, there are side streets that cross the island at right angles, and that maintain their historical personality intact. Its beaches, immense strips of sand caressed by the tides, are another reason to visit it. Not only there is the sea and the beach, there is also a health tourism organized in the resort-spa of Sottomarina within this fishing island, which is also the Headquarters of the Department of Marine Biology Studies of the University of Studies of Padova. When you arrive in Chioggia from Venice, the ferry slides along the “walls of the sea”, an impressive piece of engineering, completed in the last days of the Republic of Venice, in the eighteenth century. And among the fascinating landscape of the lagoon there are old fishermen’s cabins, ramshackle on stilts, among mussel farms.

IF YOU LIKED THIS COMPILATION OF LOCATIONS OF Italy AND YOU WANT TO KNOW MORE ABOUT REMOTE DESTINATIONS LIKE THESE FOR YOUR AUDIOVISUAL PRODUCTIONS OR PHOTOGRAPHIC SHOOTINGS, CONTACT US NOW.

The 15 most spectacular roads in the world