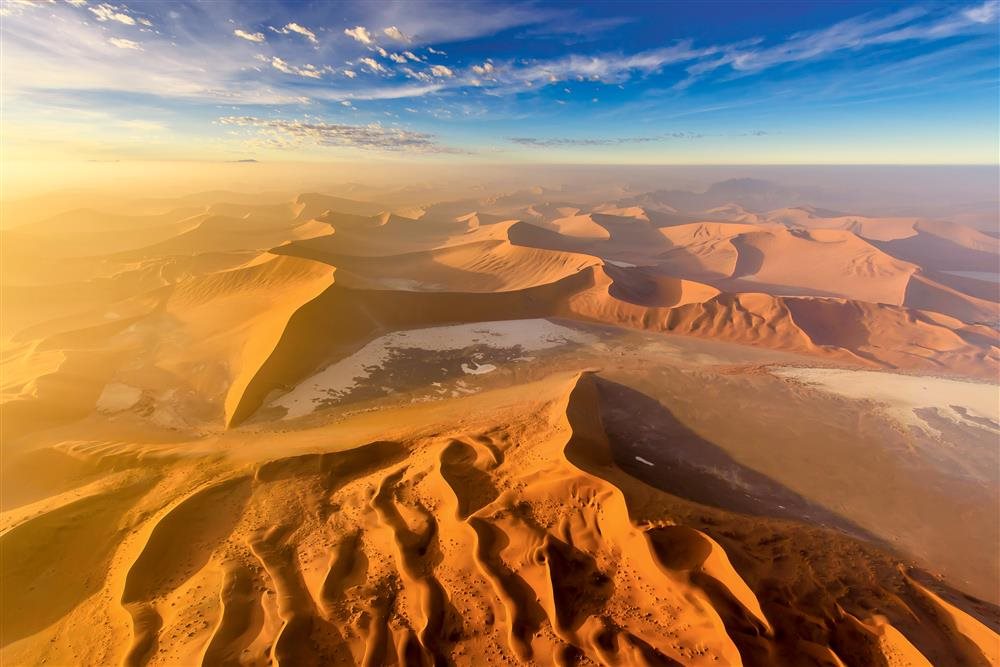 Dunes and dry rivers in the Namib Naukluft National Park.

Among the many deserts that exist in the world, we focus today on the Namib Desert, one of the few with a variety of spectacular scenery.

We can find locations as an area of dead trees in the desert (Dead Vlei), giant dunes (Sossusvlei), rugged areas that look like from another planet, and also species adapted to the lack of water.

If you are thinking of an risky audiovisual production or photographic shooting, different and with extreme conditions, this is your place. Where is it and what will we find?

The Namib Naukluft National Park is a nature reserve in the southwest of the African continent that has a great diversity of locations, including what is believed to be the oldest desert on earth. The Namib Naukulft reserve has a size of almost 50,000 square kilometers, making it the largest in Africa.

The temperatures there are unbearable, with up to 45 degrees by day and very cold at night.

Among the most outstanding locations of this National Park, we will find:

In the giant dunes of Sossusvlei, with reddish sand dunes of more than 300 meters of height, we find among others a mini “Grand Canyon”, known for the high sand dunes that surround it, sand accumulated for more than 5 million years, brought by the Orange River from the Kalahari desert.

The Dune 45, stands out among all and has become a tourist attraction. It is easy to climb, and the best time to visit it is before dawn to see the sunrise with the red color of the desert and the dunes, incomparable for your audiovisual productions or more extreme shootings. It is a star or pyramidal dune, that is, an isolated hill with several crests that start from the top formed by the variable wind directions and large amounts of sand. The Dead Vlei is another of the natural wonders of the Namib Naukluft National Park, a location just 55 kilometers from the sea in which the Orange River dies, in a landscape with dry trees that have not decomposed for thousands of years due to the lack of humidity. It evokes a ghostly landscape, ideal for shootings and audiovisual productions with mystery or magic as the main thread, inside an amazing background.

The trees are totally dehydrated so they have a certain blackish color and they do not have a single leaf. They show us a location with sun-cracked soils, presenting white tones due to the high saline concentration and entering in clear contrast with the sand of the dunes.

This fascinating and almost surrealistic landscape, where river cemeteries are interspersed with immense red sand dunes, is one of the most photographed places in sub-Saharan Africa and has become the setting for various fantasy films such as the psychological thriller ” The Cell “, where the landscape of Sossusvlei represents a virtual and dreamlike reality.

If you are thinking about a shooting or an audiovisual production at night, you will enjoy a sea of ​​stars in which it is possible to see without any difficulty the Milky Way. The Coast of the Skeletons

Where the Namibian desert merges with the waters of the Atlantic Ocean, we find a spectacular location with a cemetery of sunken and rusted ships along a coastline of almost 200 kilometers, from the mouth of the Kunene River to the Swakop River.

In this zone of the ocean, the cold Benguela current gives rise to dense oceanic fogs that, combined with strong waves, suppose a mortal trap for navigation. Even today, although there are no more incidents in the region, these beaches continue to shiver. Where the sand meets the sea

Throughout the coast, interminable sand dunes that belong to the desert of Namib are mixed and are bathed by the Atlantic Ocean, in a surrealist location where desert meets the sea.

What is spectacular about this place is that there is no transition between those two worlds. Normally deserts soften as they approach the coast, vegetation grows there and temperatures are less extreme. Here the waves of cold water are directly hit by the ardent sands, which acquire golden, orange and reddish colors. A paradise for audiovisual production and photography due to this variety of colors.

One of the best places to enjoy the majesty of these dunes is near Swakopmund, a town of 30,000 inhabitants, founded by the Germans during the colonial era. IF YOU LIKED THIS COMPILATION OF LOCATIONS OF THE NAMIBIA’S DESERT AND YOU WANT TO KNOW MORE ABOUT REMOTE DESTINATIONS LIKE THESE FOR YOUR AUDIOVISUAL PRODUCTIONS OR PHOTOGRAPHIC SHOOTINGS, CONTACT US NOW.