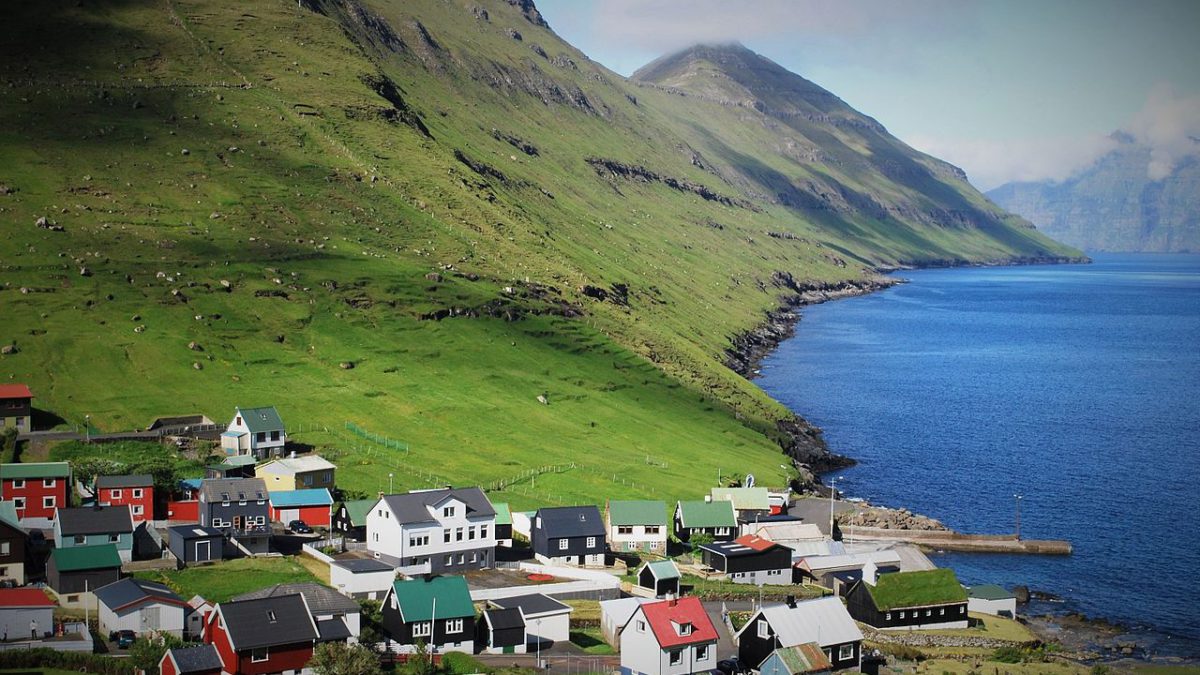 The Faroe Islands are located in the North Atlantic, geographically halfway between Scotland and Iceland. These islands are a part of the Kingdom of Denmark. The archipelago, made up of 18 islands, with only 50,000 inhabitants, is a rocky area with steep slopes, usually surrounded by thick fog. The weather is windy. It offers ideal locations for audiovisual productions or photographic shootings with a mystical, magical or mysterious factor.

The Feroes are an archipelago of islands dominated by abrupt landscapes, endless green meadows, a rural landscape where the roofs of the houses are as green as the prairies. Their Viking past is still very present in all its locations.

The smallest capital in the world

It is called Torshavn, has about 20,000 inhabitants and is located on the península of Tinganes. It has a peculiar physiognomy with its port facade of vivid colors and its old town, the oldest one of Scandinavia.

In its historical center the buildings are of wood in black and red, with roofs covered with grass that varies its color according to the time of the year.

A charming little labyrinth of slopes, with views of the port and surrounding jetties, and of the island’s inland city.

A village between waterfalls

On rainy days, very common in the archipelago, the small town of Tjørnuvík dawns amidst a clatter of water. On one side, there are dozens of waterfalls that fall down the mountains to the foot of the village, where the water is collected in a small stream, and on the other hand, we find the sea, with a beach of dark sand and strong waves.

The locations of the surroundings are not spectacular, but the small town itself can not be more beautiful, with its houses with roofs of grass.

Cliffs and a natural harbor in Gjógv

Gjógv is situated on the island Eysturoy. It has a natural harbor between cliffs. The port and the gorge that connects it to the sea is one of the best locations that the village can offer you.

Gjógv lays at the foot of huge mountains that many days are hidden in the clouds, and next to fields where grass is grown and sheep feed, offering a variety of locations for your audiovisual productions or photographic shoots.

A lake almost in the sea

Lake Sorvagsvatn has one of its banks located by the sea, separated by a cliff of 32 meters of height from the ocean. The lake, located on a raised rocky platform forms at the same time a natural dike, an unique location in the world.

It is the largest lake on the Faroe Islands, and is located on the island of Vágar. It reaches a maximum depth of 59 meters. Cataract in the ocean

Gasadalur is a small town on the north-west coast of Vágar Island, one of the 18 islands that make up the archipelago of the Faroes. It is situated on the top of a mountain that is part of the strait of Mykinesfjørður, which separates the islands of Vágar and Mikines.

The main attraction in this small town is a spectacular waterfall that is born on one of the walls of the cliffs and that draws a location of a beauty difficult to compare.

Approach to the lighthouse of Kallur to contemplate some impressive panoramas of cliffs and rocks.

A village between mountains

Funningur is a small village on the Faroe Islands, located northwest of the island of Eysturoy, on which we find also the highest mountain of the Faroes: Slættaratindur (882 m).

It is called Kirkjubøur, and is located on the west coast of Streymoy Island. It is scarcely populated today, it was rebuilt after being ravaged by storms two centuries ago. What we see today is the very well preserved traditional aspect of the village. IF YOU LIKED THIS COMPILATION OF LOCATIONS OF THE Feroe Islands AND YOU WANT TO KNOW MORE ABOUT REMOTE DESTINATIONS LIKE THESE FOR YOUR AUDIOVISUAL PRODUCTIONS OR PHOTOGRAPHIC SHOOTINGS, CONTACT US NOW.

Dunes and dry rivers in the Namib Naukluft National Park.