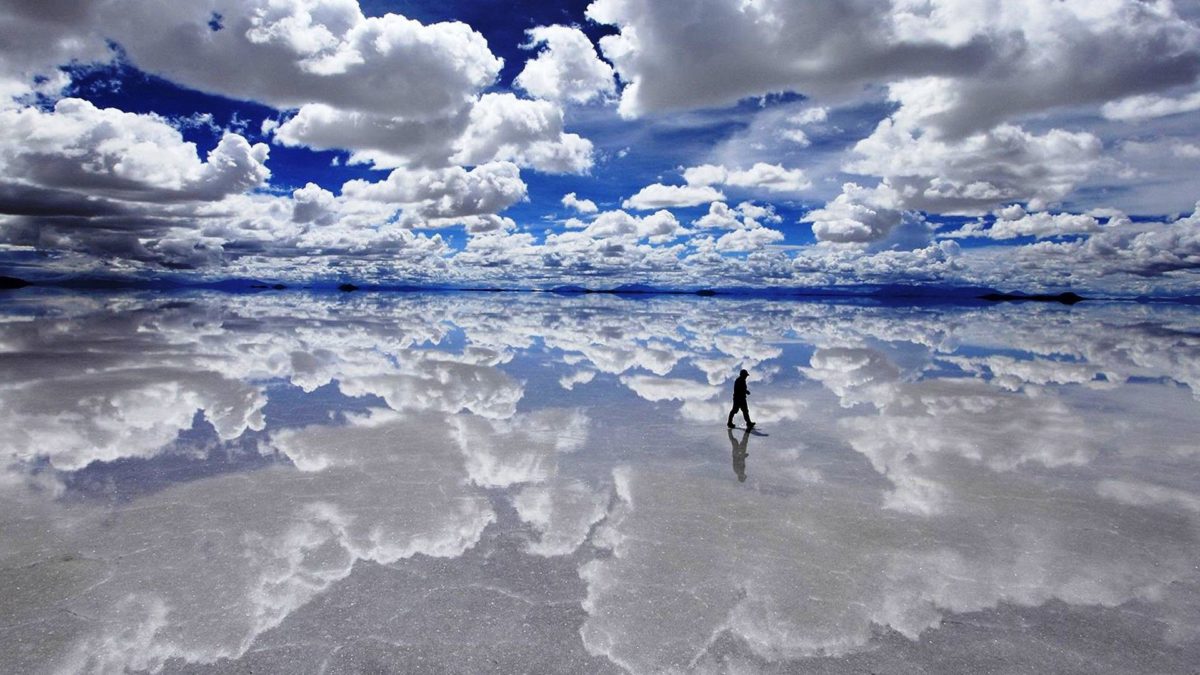 The Salar de Uyuni with its 10,582 square kilometres is the largest salt lake in the world. It is located in the department of Potosi in Southwest Bolivia, near the crest of the Andes, at an altitude of 3,650 meters above sea level.

At this location, and especially in the rainy season, there are no visual boundaries between heaven and earth. When it rains, the completely white salar becomes a perfect mirror in which the sky is reflected. This phenomenon occurs primarily between the months of January and March, when the salar becomes a large shallow lake.

It is estimated that the Salar de Uyuni contains 10 billion tons of salt, of which less than 25,000 tons are extracted annually. What should you keep in mind? Between the months of June to September (winter) the lowest temperatures are found. We will find then clear and bright skies ideal for excellent photographic and video shots, with temperatures between -15 and 10 degrees.

However, the greatest visual spectacle occurs in the months between January and March when the Salar is usually flooded and becomes a large shallow lake that produces the spectacular reflections that confuse earth and sky. You should keep in mind that during these months bad weather is frequent.

The village of Uyuni is practically isolated from the world, geographically speaking, but accessible by rail. It is connected through unpaved routes with other towns and cities.

The railway complex of Uyuni has, over time, become one of the most incredible train cemeteries in the world. It seems that neither the wind nor the extreme temperatures of the place affect these silhouettes. A piece of land in the middle of a sea of salt (the Uyuni salar). The island stands out for its giant cactus, up to 10 meters high and for its views towards the salt. It is formed on the remains of a volcano of petrified limestone. Located in the south of the Department of Potosí, it houses extraordinary polychrome lagoons: Laguna Colorada and Laguna Verde. Furthermore, geysers and geothermal wells of surprising forms and an enormous diversity of flora.

The red coloration of its waters is due to sediments of the red color of the pigments of some types of algae. It does not always have the same color, the variation of the characteristics of its waters as well as the light according to the time of day and the climate give it different tones, ranging from brown to intense reds. The cold temperature of the surroundings, at the foot of a hill, contrasts with the thermal waters emanated from the Polques Volcano creating a view worth admiring. You can take a bath in water of 29 degrees Celsius and a high content of minerals. Sol de Mañana is a volcanic zone of Bolivia whose main phenomenon is the presence of geysers. It is a desert area of ​​about 2 kilometres that is located at 4850 meters above sea level. During the morning there is a more marked difference in temperature between the air and the vapour, that difference, added to the illumination of the sun during those hours, offers a spectacle that is magnificent.

IF YOU LIKED THIS COMPILATION OF LOCATIONS OF THE Salar the uyuni AND YOU WANT TO KNOW MORE ABOUT REMOTE DESTINATIONS LIKE THESE FOR YOUR AUDIOVISUAL PRODUCTIONS OR PHOTOGRAPHIC SHOOTINGS, CONTACT US NOW.