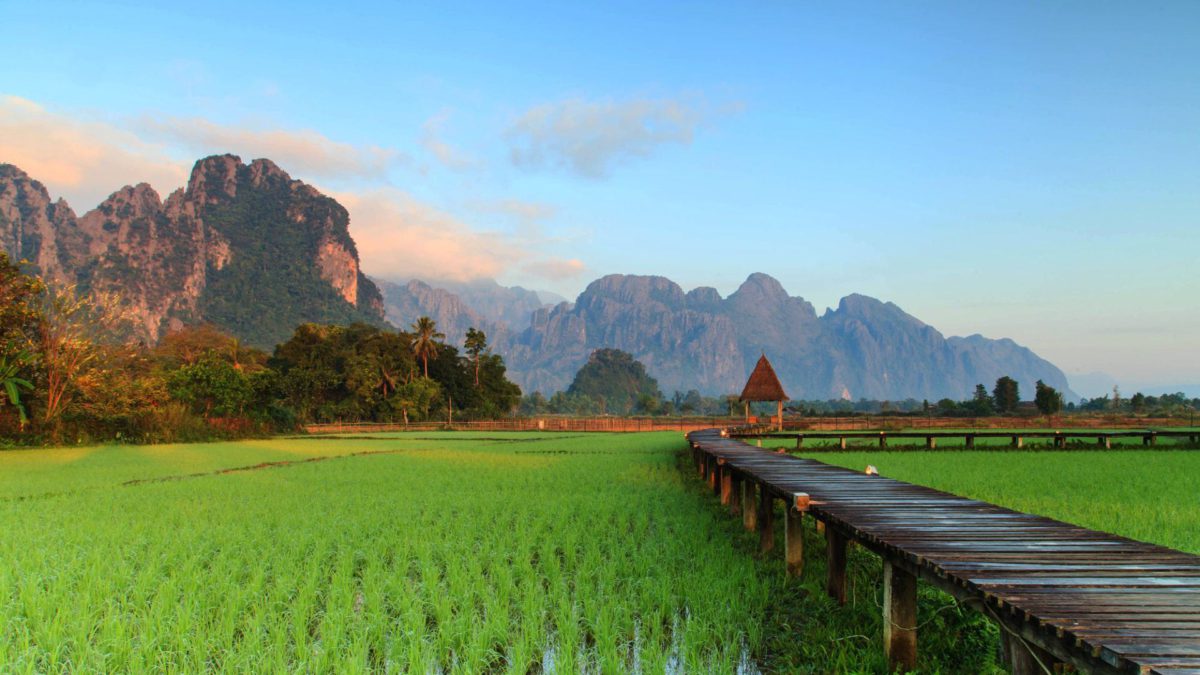 Laos is located among some of the most visited countries in Southeast Asia, such as Thailand, Vietnam, Cambodia, Myanmar and China. It is the only country in the area that has no coastline but it is known for some of the most beautiful landscapes in Asia. It is a quiet territory full of contrasts that you can choose for your next audiovisual project.

This “country of the million elephants” is still today one of the most authentic destinations that can be visited throughout Southeast Asia, although little by little mass tourism is arriving.

Laos still keeps the essence and traditions of the past and continues to be a rough diamond in Southeast Asia. It revolves around the mythical Mekong, the great river that runs from north to south. It is an ideal country for nature lovers, it is full of spectacular landscapes, has a huge Buddhist heritage and a friendly, happy population that makes one feel at peace while traveling through this authentic country. You will not know which location to choose for your audiovisual production or photographic shooting!

The best time to visit Laos is between November and February, it rains less then and it is less hot. Usually there are then more visitors than normal. The hot season runs from March to May and the rainy season from June to September. The temperature varies, according to the zone you are, from 10 º C in the mountains to 38 º C in the lower parts.

The city of Luang Prabang

At the confluence of the Mekong and Nam Kha rivers lies one of the most beautiful and charming cities in all of Southeast Asia: Luang Prabang. It was declared a World Heritage Site by UNESCO in 1995 and daily monks, locals and tourists go through its streets full of temples and colonial houses.

And if the center of Luang Prabang is all culture and history, its surroundings are nature in its purest form and adventure: sailing on the Mekong or swimming in waterfalls. What do you need for your next audiovisual production? In the middle of a jungle landscape, water makes its way through the vegetation, leaping between turquoise water ponds. It is called Kuang Si waterfall, and although it is not the only one in the area, it is one of the closest to the city of Luang Prabang (about 30 kilometers to the south), and one of the most famous.

The waterfall turns stepped into turquoise water ponds, after a main fall of about 50 meters high. The tour continues through beautiful turquoise pools downstream, creating a landscape that is a visual and sound delight. This set of waterfalls is less than 20 kilometers from Luang Prabang, but is more difficult to reach. It is less crowded. The calcareous formations give rise to a set of stepped pools where it is possible to bathe.

In the complex of the Tad Sae Waterfall a small elephant camp has been set up, it is possible to feed them, bathe them or take a short tour with them. In the center of Laos, halfway between Vientiane and Savannakhet, we find Kong Lor, an extraordinary cave where an underground river with a length of 7 km passes in absolute darkness. The entrance light illuminates the cave for a very short time and in a matter of seconds absolute darkness reigns in the place.

Halfway down the road you begin to see light, but it’s not the exit, what you find there is a part of the artificially lit cave full of stalactites and stalagmites. Although it is a location that requires an advanced production technique due to the darkness of the place … you can evaluate it according to the needs of your production.

The most casual place in Laos is undoubtedly the “archipelago” formed by some 4000 islands in the middle of the Mekong River in the south of the country. Known as Si Phan Don, this set of small islands offers cycling the rice fields, watching the river on its way to Cambodia, reading in a hammock. Here the Mekong River turns turquoise and it is an idyllic place to relax. In the north of Laos, in a bend of the Nam Ou river, lies the small town of Nong Khiaw. The town is not more than a handful of houses and some accommodations for travelers located next to the river, but the enclave in which it is located, in the middle of limestone mountains, gives it a fairytale appearance.

Rent a bicycle or walk around the outskirts where among other things you find caves. Alsofrom there you can navigate on the river to Muang Ngoi, a serene, sleepy village on the shore. Accessories and sportswear are the ideal products for this location in the middle of nature. Vang Vieng is a small town in the center of Laos. It is located in a natural landscape of extraordinary beauty, characterized by the high peaks of rocks that frame the Nam Song River and dominate the landscape with rice fields as far as can be seen.

Impressive at any time, it is at sunset that this area reachs its peak moment, made up by the pink tones of the Asian sky at dusk. It is famous for the “Tubing”, a river trip on the Nam Song river, sitting on a giant tube with stops at the bars on the banks Nearby you can visit the cave of Tham Phu Kham, considered sacred by the Laotians and very popular for the blue-green lake at its entrance and the image of the reclining Buddha in bronze. From there, rock corridors go into the interior of the mountain, very dark. Easier and more accessible is the cave of Pha Poak, which contains curious rock formations. From here you can enjoy an amazing view of the town and the river The spectacular Wat Phou temple in the region of Champasak is a World Heritage Site by UNESCO since 2001. This ensemble of Khmer temples, built in the 11th century, leaves anyone speechless with the spectacular nature that surrounds it. The Wat Phou complex rises on one side of the Mekong river, between the stream and the Phu Kao mountain, with a perfect geometric shape using the natural elements as axes.

It is a complex formed by ruins, a temple, a sanctuary and a museum of the Khmer civilization, that is more than 1000 years old. It reminds you in a way the famous Temples of Angkor. Its design is based on the mountain that reigned the place and, still at the moment, the traveler is impressed by the grandiosity of the plateau in which Champasak is situated.

If your next audiovisual project is looking for ruins and landscapes, typical of an ancient civilization, this is your place. The Plain of the Pots – Xieng Khouang

Thousands of megalithic jugs are scattered across the plateau of Xieng Khouang. Various investigations, carried out in the early 1930s, associated this jugs with prehistoric funerary rites. It is one of the most important and fascinating sites on the prehistory of Southeast Asia. Do you want to discover it in your next audiovisual production? Without a doubt it is an original and unique location. In a radius of 40 kilometres from the city of Pakse, the most representative waterfalls of the Bolaven Plateau can be reached in 1 day. So there are:

With 2 mouths of water and a fall of 100 meters high, the Tad Fane waterfalls are the most spectacular of all the Bolaven Plateau. Two waterfalls very close to each other just outside the village of Tad Lo. The furthest from all the waterfalls in the area, but of great beauty, in the middle of the famous Ho Chi Minh road. With all these locations to offer, Laos can be a country of great value for your next audiovisual project. We are ready to help you to achieve it.

IF YOU LIKED THIS COMPILATION OF LOCATIONS OF Laos AND YOU WANT TO KNOW MORE ABOUT REMOTE DESTINATIONS LIKE THESE FOR YOUR AUDIOVISUAL PRODUCTIONS OR PHOTOGRAPHIC SHOOTINGS, CONTACT US NOW.