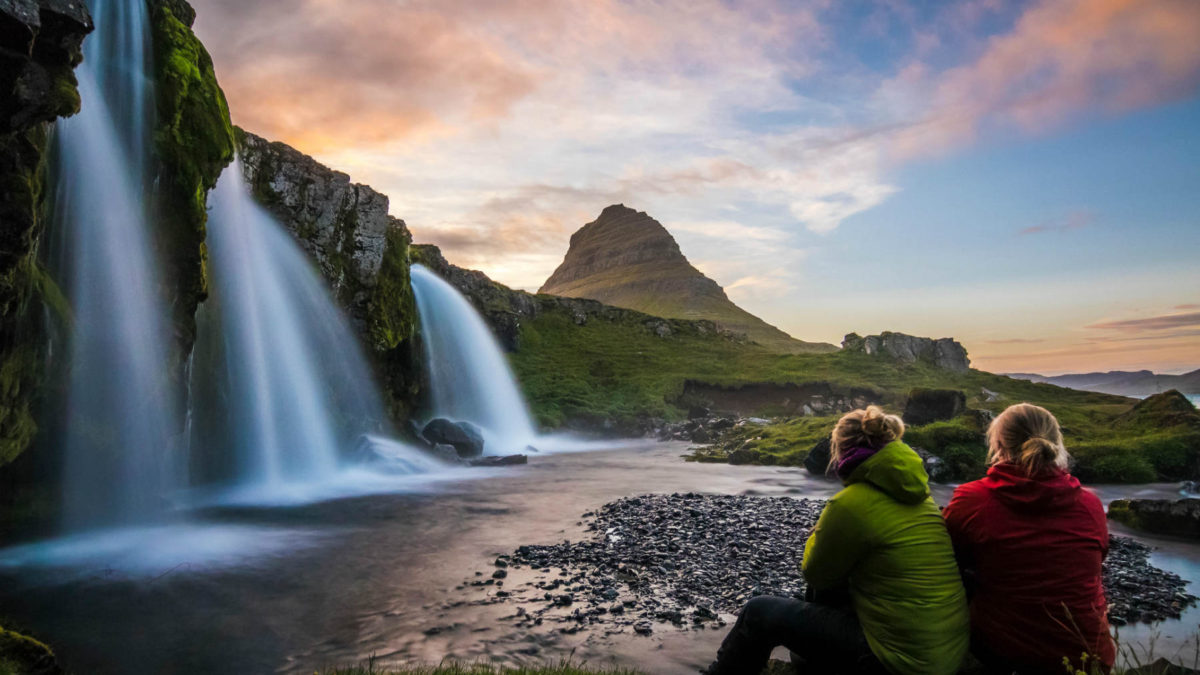 Iceland is a collection of landscapes that break the clichés of our planet. In this article we review some examples of this remote European country, land of volcanoes and geothermal activity that will be the ideal place for your next audiovisual production or photographic shooting.

Iceland is the “Land of Ice”, and its geographical location explains it all. The arrival of summer, with a more temperate climate and thaws, feeds the strength of some of its water courses, with torrents capable of generating the largest waterfall in Europe.

It is characterized by an exceptional landscape, the result of the great volcanic and geological activity that never ceases in this land. The current of the Gulf that passes through these latitudes makes the climate in the country temperate and ideal for your next audiovisual project. Bruarfoss is a bit isolated from the road, between some hills. It is one of those spectacular corners, a small waterfall on the way to Geysir and Gullfoss. But what makes it special is not its size, but its turquoise blue color, a site that invites photographers to take shots in long exposure with incredible results in your photographic shooting or audiovisual production. Dettiffos and its canyon are one of the most dramatic and imposing landscapes of Iceland. The giant waterfall is 100 meters wide with a drop of 44 meters. Here you can find your wildest audiovisual project. The name of the canyon is Jökulsárgljúfur, and it gives its name to the National Park located in the north of Iceland. Volcanic activity for thousands of years creates here a landscape that could be defined as “mountains in ruins”, in a part of the site the water course runs between vertical rock walls.

Jökulsárlón is the name of a lake of glacial origin, and it is the deepest one of Iceland. What makes it famous is that its water reflects icebergs of beautiful shapes and colors, coming from the Breiðamerkurjökull glacier, a show changing at every moment due to the movements of the ice giants.

The Jökulsárlón lake is located south of the Vatnajökull glacier, in the vicinity of the city of Höfn, and is one of the great natural attractions. It is one of the most easily accessible places in the world to observe icebergs, so you can take advantage of it for your photographic shooting or audiovisual production.

Landmannalaugar is another incredible volcanic landscape in Iceland, accessible only in summer. It is located in the region of the Heklay volcano and has natural thermal pools that could be the ideal background for your photographic shooting or audiovisual production. This environment, full of multicolored mountains between lava fields, covers a range of colors from pink, brown, green, yellow, blue and black to white.

Located in a region that is only accessible a few months a year due to the weather conditions. It is an inhospitable site, which was used to train astronauts for the missions to the Moon. It includes craters that seem to sleep, covered with water in intense colors caused by their mineral wealth.

Askja is the most important crater of the Dyngjufjöl volcan, just 1,500 m high, it has a crater lake and is located next to another, smaller, crater called Viti, easily identifiable by its intense blue-green color. A spectacular background for your audiovisual project. The Golden Circle Route starts from Reykjavik, the Icelandic capital, which is also the northernmost national capital of the world. In the winter season you only have four hours of sunlight to enjoy and in summer, the nights are as clear as the day. The city is located very close to the Arctic Circle, in a region with geysers, everywhere.

The route goes into the center of the island, there are three main stops and the first is in Þingvellir, a valley in the southeast of Iceland, near the Reykjanes peninsula. Along this route you will find, at least, 3 different locations for your audiovisual production or photographic shooting.

Since 1928 Þingvellir is a National Park and since 2004 a World Heritage Site by Unesco. This zone allows to see the continental drift that caused the gorges that cross all the continent. The biggest one is Almannagjá and you also should pay attention to the gorges full of clear water like Nikulásargjá whose bottom is full of coins thrown by tourists making their wishes.

Gullfoss is a waterfall and one of the most popular places in Iceland. The Olfusa river flows here down into a wide three-step “staircase” of 32 m deep. The crevice is about 20 meters wide and 2.5 km long. At first sight its edge is hidden from view, making it seem that the powerful river simply disappears into the earth. The valley of Haukadalur, north of Lake Laugarvatn, has great geothermal activity that generates dazzling geysers among which the best known are the Geysir and the Strokkur. Two hours from Reykjavik we find the area of Vik with a coast characterized by its volcanic activity. The beaches that face the Atlantic seem to be the “end of the world”, a border between volcanic rocks, ash and black basalt columns modeled by the sea. Iceland’s highest humidity give this region an even more mysterious air, which may be ideal for your next audiovisual project. Within the Skaftafell National Park, one of the main attractions is the Svartifoss waterfall, which fall is framed by black columnar basalt formations of volcanic origin. You shouldn’t miss this location for your photographic shooting or audiovisual production! The glacial tongue Svínafellsjökull, part of the Vatnajökull glacier, looks like a frozen sea. Sometimes it is covered with volcanic ash, but with some luck, you will find it in its most usual version, when ice of a light blue color and the snow make it look like a rough sea that will be great in your audiovisual project.

Iceland offers unique natural contrasts, such as the eternal struggle between fire and ice, in areas such as Fimmvorduhals. In an area of glaciers runs one of the most popular walking routes in the country, the Fimmvorduhals Hiking Trail. Along the route you see fissures from which lava flows, turning snow into steam. Difficult to find something like it, take advantage of it for your audiovisual production or photographic shooting. IF YOU LIKED THIS COMPILATION OF LOCATIONS OF ICELAND AND YOU WANT TO KNOW MORE ABOUT REMOTE DESTINATIONS LIKE THESE FOR YOUR AUDIOVISUAL PRODUCTIONS OR PHOTOGRAPHIC SHOOTINGS, CONTACT US NOW.

The indespensable locations of China