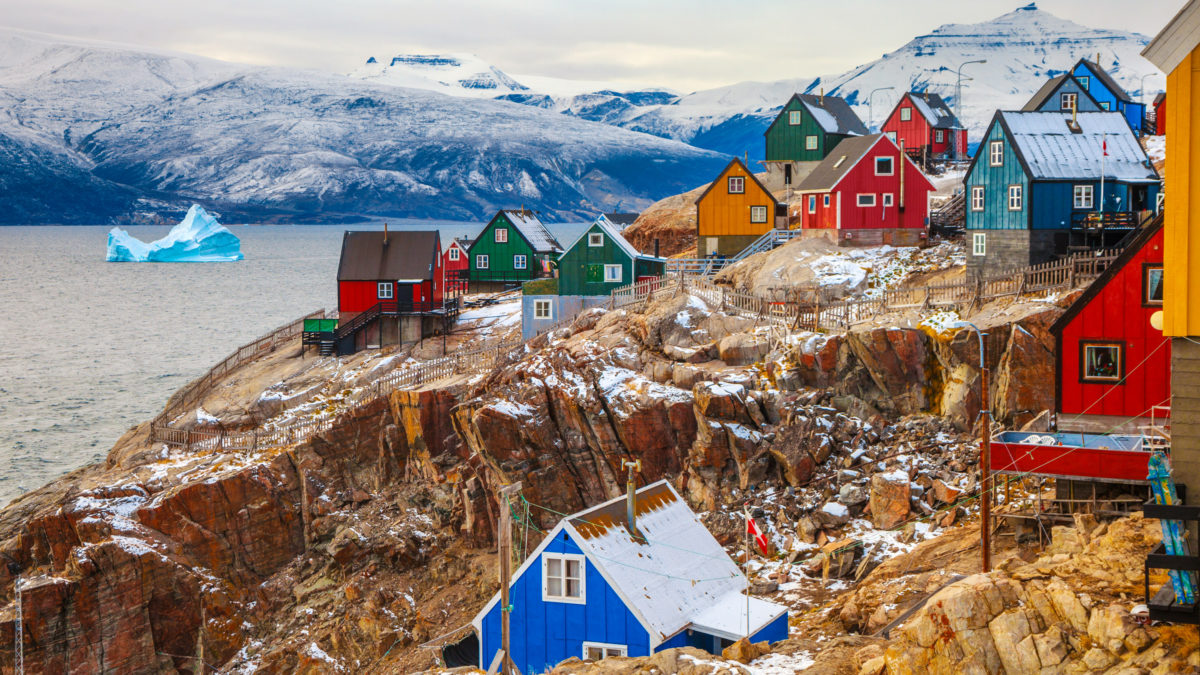 The most amazing locations in Greenland

Greenland is located in the Arctic, east of the Canadian Arctic Archipelago and northwest of Europe. Its surface is 2,175,600 square kilometers, of which 81% is covered by the perpetual ice of the North East Greenland National Park, the second largest frozen desert in the world. The best time to visit Greenland is during the summer months July and August, when the weather is more benevolent. Between April and June there are more daylight hours. March, although colder, is the best month to see the northern lights. In Greenland just over 56,000 people live, of which almost 90% are Inuit.

Photographic safaris through the fjords, visits to Inuit villages, excursions to the frozen mountains, cruises on the Disko bay to see walruses and whales, dog sled crossings, helicopter rides and trekkings of different difficulty are some of the activities you can perform in Greenland for your audiovisual project.

In Greenland there are no railways and hardly any roads. Therefore, transfers between towns are done by plane, helicopter, boat or kayak, a factor to consider if you are thinking about doing a photographic shooting or an audiovisual production there. The capital of Greenland. Culture, nature and art meet in this authentic and cosmopolitan city. Some 15% of the inhabitants of the island live here and the Parliament, the University and the National Museum are located here. Nuuk has an important commercial port and is an excellent base for exploring the fjords of the south of the island.

Surrounded by nature, old traditions and contemporary influences, this area is the most modern part of this corner of the world. Ideal as a first stop for your audiovisual project, to familiarize yourself with the country. The small fishing village of Ilulissat, on the Disko Bay, with its multi-colored houses, is one of the most tourist destinations in Greenland. It is located at the mouth of the Icefjord, a glacier that produces more than 20 billion tons of ice each year in the form of icebergs that you can capture in your photographic shooting or audiovisual production. .

The landscape is apocalyptic, according to the time of year; with a bay full of gigantic icebergs that change location and shape almost every hour. Until late into the summer the bay is inaccessible by boat. Disko Bay lies 300 km above the Arctic Circle, and has the island of Disko at the north and the city of Ilulissat to the south. And in between, a continuous spectacle of fjords and icebergs. This is one of the few points on the south coast through which you can access the interior of the island, the great ice plateau of the Inlandsis. It is one of the most spectacular glaciers in the south.

It is near the city of Narsaq, from where you can make trips by inflatable boat. A good way to see the front of the glacier, or to disembark on the coast for hiking on foot through the moraine of the glacier. Undoubtedly you will get some spectacular images for your most icy audiovisual project. One of the most beautiful fjords in southern Greenland. It is surrounded by black rock towers and large vertical walls frequented by mountaineers for its climbing routes, wrapped in an almost unreal scenario. An ideal climbing location for a photographic shooting or audiovisual production related to this sport.

This ancient Viking ceremonial town is probably the most picturesque village in southern Greenland, where only about thirty inhabitants live. Here the first Christian archbishopric of Greenland was based. There are the ruins of the medieval church, the bishop’s farm and some other buildings. An almost desert landscape in the middle of nature to locate your next audiovisual project.

One of the northernmost towns in the world. In this region, many inhabitants still live on the hunting of whales and polar bears. Here you will find the most primitive environment for your audiovisual production or photographic shooting. This small village in the south end of Greenland is dominated by an impressive mountain from which there are good views over the houses, the wooden church and the adjoining landscape. A town surrounded by mountains, with a peculiar character for your audiovisual project. It is the largest city in the south of the island and the most beautiful. Its wooden houses are articulated around a cozy square presided over by a fountain, the only one on the island. Another interesting location for your photographic shooting or audiovisual production. It was the first settlement of the Vikings, from the year 982. There are remains of the house of Erik the Red. In this small Inuit settlement on the Eriksfjord, you can see the reproduction of the first Christian church in Greenland and the replica of a Viking house of the eleventh century. Kujalleq is the least populated municipality of one of the most extensive and unpopulated territories of the planet. In this area, at the southern tip of Greenland, mountains, fjords and glacial erosion abound, but also ice floes and colorful cities that even look like fairy tales. Discover in your photographic shooting or audiovisual production how the frozen form can be presented with great beauty. It is the most populated community on the east coast of the vast island of Greenland, and the gateway to pretty much every kind of adventure the island offers. Tasiilaq is seen from afar as a model with colorful houses, located just about 106 kilometers south of the Arctic Circle. This is a great opportunity to discover one of the last intact parts of the planet in your audiovisual project. IF YOU LIKED THIS COMPILATION OF LOCATIONS OF Greenland AND YOU WANT TO KNOW MORE ABOUT REMOTE DESTINATIONS LIKE THESE FOR YOUR AUDIOVISUAL PRODUCTIONS OR PHOTOGRAPHIC SHOOTINGS, CONTACT US NOW.

Locations in Cape Town and its surroundings